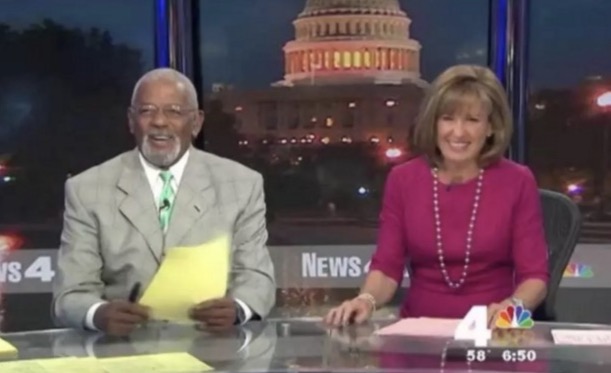 We were originally going to share this clip as an example of the way great teams interact and work together even when they are not necessarily see together. (See the subsequent post, “Chemistry and the Paced-Up Newscast”). It is that, but a simple backstory made us aware that it is also an example of something that is much more important.

At the time we came across this, Dianna Russini (now with ESPN) was the sports anchor featured here and the newest member of this team. Because anchor Dan Hellie had departed for the NFL Network, Russini unexpectedly found herself front-and-center almost the minute she stepped off the plane in Washington — smack dab in the middle of Redskins training camp and the RGIII controversy.

Talk about a spotlight! And after viewing this sequence she remarked what a gift it had been to step into that spotlight with anchors Jim Vance and Doreen Gentzler in her corner.

“I always felt they were really listening — really paying attention,” she said. “Their genuine interest and support helped me feel like a valued member of the team. That was huge.” It was huge because Russini had lost the usual time a new talent has to dig into a new market. She was basically having to learn the market as she went, at a time of the year when the in-depth interest of local sports fans is arguably at its peak.

It all reminded us of the best and possibly most reliable coaching recommendation we know:

If you want to be great, just do everything you can to make everyone around you great.

Truly great talent are distinguished not just by their own work, but by the ways that they support and influence the work of the people around them. On television, as in the rest of life, it’s not what you do for yourself but what you do for others that truly makes you special. Even what seem the simplest acts of generosity — like taking the time to truly listen and support the work of a colleague — can make a huge difference. This all works because the folks at the center of it all — anchors Vance and Gentzler — understand that.

Previous: Why Volume Matters
Next: The Power of Wow